My biggest worry about going on holiday: what would James eat? James is a child that will only eat foods he recognises, apart from whenever I eat any kind of chocolate bar. As soon as he sees me open that wrapper he is like a vulture trying to grab some, and I’m not really one that likes sharing chocolate.

I hoped that on this holiday James would start trying new foods. We were all-inclusive so there would be an abundance of food available for him to try. I hoped that in seeing so many different foods he would at least be tempted by something new. However, in reality I feared that we would really struggle. There were many Trip Advisor reviews saying that the buffet accommodates even the fussiest of eaters, well they hadn’t met my fussy eater.

My first concern was breakfast. James will only eat dry Shreddies and Weetabix with milk. I read some reviews on Trip Advisor to try to gauge what sort of cereal selection would be at the hotel, but I was none the wiser. Now taking a box of Shreddies and Weetabix would take up some valuable suitcase space, so if I could I was keen to avoid doing this. I then wondered if I could buy these cereals in Ibiza, if he was going to refuse everything else. I decided to message my friend Kamila that lives in Majorca. I thought if they sold these cereals in Majorca then they would likely sell them in Ibiza. Kamila informed me that they did sell these cereals but in bigger supermarkets, hmm could I take that risk? Kamila then went above and beyond and called my hotel to ask them what cereals they had (she works for a travel company so is used to these bizarre questions). She then sent me a photo of the cereals and unfortunately none of them were Weetabix or Shreddies. Kamila probably doesn’t realise how much she helped me out there, and I certainly didn’t expect her to call our hotel. I decided I would have to squeeze some into a suitcase. James eats a lot for breakfast and I knew if he was still hungry it would affect his mood. The other familiar food items I took with us were snacks and Aldi yoghurt pouches. I thought if he was going to be hard to feed at mealtimes I could at least make sure he had familiar snacks.

We arrived at our hotel in time for the evening meal. I was impressed by the selection of food, and especially with the children’s buffet. Not with what it contained, but the idea of it. It was at child’s height, had colourful plastic cups, plates, bowls and cutlery which I thought was a great touch. There wasn’t a vast amount on the children’s buffet, and other than potato smiles there was nothing on there that was different to what was on the adult buffet. However, we did kick the holiday off to a good start with food for James. There was some breaded chicken on the buffet. I even chanced it by giving him some potato smiles and pasta, but he refused them. He did happily eat the chicken and finished them off with a bowl of strawberry ice cream, a flavour of ice cream he hadn’t had before. We felt pretty positive about the food situation after the first meal. He ate something and that was great. We then probably got a bit too excited discussing all of the other breaded products we had spotted, that we could get him to try. 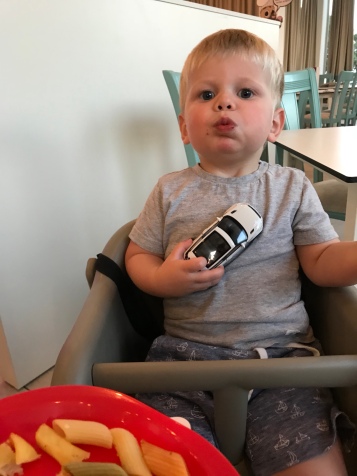 The next day we gave James dry Shreddies when he woke up, to keep him going until we were ready to go down to breakfast.  Breakfast was a meal I didn’t think there was any chance he would eat anything other than Weetabix, so I took them down in my bag and we just added milk when we got down there. He ate the Weetabix no problem which was great.  We did try to get him to try some pastries, yoghurts and baked beans (as he eats them at tea time at home) over the week but he wasn’t interested.

The second day meal times started to go downhill and become extremely stressful, after the relatively good start on the first day.  At home James usually has his lunch at 12 and then his nap at 1.  The hotel lunch buffet didn’t start until 1 so we already had a overhungry child.  We put a selection of things on his plate, including bread and chicken.  He refused to eat any of it, despite being hungry.  We ended up giving him snacks, a yoghurt pouch and Shreddies in the hotel room, which he happily ate.  All of these foods were familiar to him.

After the unsuccessful lunchtime I wasn’t very optimistic about dinner time. We tried to stick to things that looked familiar. There was breaded cod, which we thought may be like fish fingers, and there were roast potatoes that we mashed to be more like mashed potato. He did try the cod, as it looked familiar, but he spat it out and wouldn’t eat any more. He completely refused to even try the potato. I could see another child next to us watching James refuse everything.  When you are desperate for your child to eat something you can resort to giving them anything just to try to get them to eat something.  I then went and got a yoghurt.  He eats yoghurts at home so thought even though they were different yoghurts than at home, he may see that it is a yoghurt and eat it.  He cautiously tasted it but refused to eat any more.  I could see the child next to us wondering why our child was getting desert when he hadn’t eaten any of the savoury items on his plate.  It probably really annoyed him when I then went and got James some ice cream. However, James also refused to eat that. It was so frustrating knowing that he had eaten ice cream the day before. 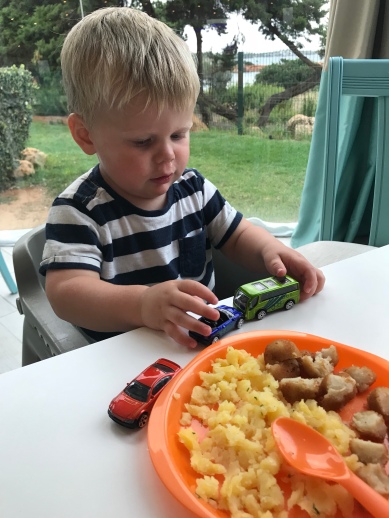 He was getting annoyed and frustrated.  He was hungry and probably couldn’t understand why he wasn’t getting what he liked. Normally at hotel buffets we eat quite leisurely and go up and have a look and get seconds and even a desert.  This time we were eating our food as fast as we could because James was kicking off.  There certainly wasn’t time for seconds or a desert.  James wasn’t enjoying mealtimes and neither were we. I would look at the other children eating nicely and eating a variety of foods and wonder what I had done wrong for my child to be so fussy about what he eats.  Where had we gone wrong?  I would walk back up to our hotel room and want to cry. I just wanted James to eat something, and hated seeing him so unhappy.

We didn’t want James to go to bed hungry, and knew if he didn’t eat he would be harder to manage with bath time and going to sleep.  It was therefore a tea of Shreddies for James. I only took a small box of Shreddies with me, so I was starting to worry that at the rate he was eating them they would be gone in no time, and they didn’t sell them in the supermarket nearby.

Mealtimes were becoming very stressful for us all. James would try to run away every time we got to the dining room and we knew we would be faced with a battle to get him to eat anything. He was hungry but wouldn’t eat anything because nothing was familiar to him. I imagine some people reading this are thinking why didn’t we just let him go hungry and surely he would eat something if he was hungry enough. I don’t want to let James go hungry. When he is hungry he is a nightmare. We were on holiday and wanted to have a good time, not worry about what James was going to eat or be dealing with a very hungry toddler. That wouldn’t be fun for any of us.

After two days of James pretty much only eating Shreddies and snacks for lunch and dinner we had to try to come up with a solution. I was rapidly going to run out of snacks and Shreddies if things carried on this way. My husband is someone who does whatever he can to make James and I happy, we are very lucky. He didn’t like seeing me stressed and he didn’t like seeing James unhappy. He decided he would go and speak to the hotel to see if there was anyway they could help us, and I am so glad he did. He explained that we had a VERY fussy eater who was really missing having chicken nuggets for tea and toast for lunch. They told my husband that the pool snack bar would be able to do James some toast at lunch time and we went to the supermarket to get some peanut butter. He was therefore able to have peanut butter on toast for lunch, with the added bonus that the snack bar does food all day so James was able to have his lunch earlier. They also arranged for the restaurant to make James chicken nuggets every night for the remainder of our stay. We just had to go and speak to one of their staff each night and she would get the kitchen to make him some.

The first evening after the nugget deal had been brokered, we nervously waited for the nuggets to be presented for James’ approval. The waitress brought a mountain of them out. We cut them up and James seemed interested, glancing over them curiously. I lifted a piece to James’ mouth, as he had already decided that he wasn’t going to feed himself. We waited to see if he would spit them out. It was probably the longest few seconds of the holiday.  SUCCESS! He loved them. We were both so happy and felt a huge relief that finally James was eating something in the dining room. Every night after that they would come out with a mound of chicken nuggets and were always shocked at how many James would eat. This made such a different to mealtimes. We had our happy child back that wasn’t kicking up a fuss in the dining room and we were able to enjoy our dinners too. He even started laughing at other children running around and the staff coming to see him. He loved his chicken nuggets so much he used to lead us to the dining room during the day to try to tell us he wanted them now. I know chicken nuggets aren’t the best thing for him to eat all holiday but we were desperate (I was worried he wouldn’t even eat those at first!) We are so grateful that the hotel were able to accommodate us in this way and wrote both the reception and dining room staff a thank you note from James at the end of the holiday. 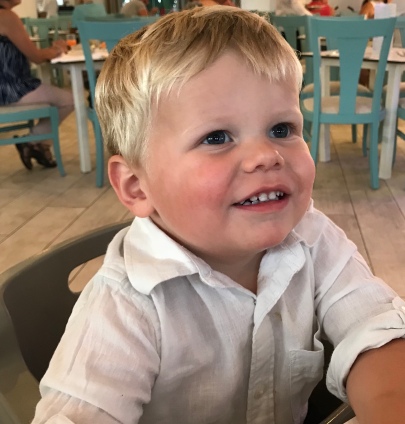