Last week we went on a road trip to spend 3 days in Chester.  This wasn’t going to be any old road trip, but one where we were meeting friends we had made in Lithuania and hadn’t seen since we left.  They have a daughter a couple of weeks younger than James.  The last time we saw them was when our babies were just 4 months old.  I made friends with Evelina when James was only about a month old.  We met on Facebook after I responded to her post asking if anyone with a baby wanted to join her and her baby for walks in Vilnius.  We instantly hit it off and would spend our days walking until our baby’s fell asleep, going for lunch and hoping that they wouldn’t wake up until we had finished. We had a lot in common.  We were both first time mums, our baby’s were of similar age, we were both breastfeeding them to sleep, they both liked to resist sleep, we were always tired and neither of us had family living nearby.

Evelina and her family spend a lot of time travelling; living for short periods of time in different countries.  A lifestyle that I really admire, but one I really couldn’t imagine doing ourselves with the stress that it would bring me with James. However, for them it works and they get to give their daughter such wonderful experiences. We keep in touch via Facebook and Evelina told me that they were going to be living in London for a few weeks and would we like to meet up with them somewhere in the UK.  Of course we would, so we opted for Chester after finding the DoubleTree by Hilton Hotel and Spa which seemed to meet all of our needs. The spa was certainly a big appeal for me.

Normally when we go away with James I feel quite anxious, but this time I didn’t.  This time I was looking forward to meeting up with our friends and their daughter. Then on the journey there my husband decided to worry me – have you thought about how this is going to work?  They may have different bed times? Nap times? He was right, I hadn’t discussed routines with Evelina, but I just figured we would sort something out and it was only going to be two nights away.

They arrived at the hotel before us and their daughter was already napping.  As usual, James was really well-behaved in the car journey there.  He loves cars and lorry’s so I think being able to see these on the motorway keeps him entertained.  He didn’t nap though, which meant he was going to need a nap when we arrived. After being confined to his car seat for 2 1/2 hours the last thing he wanted to do was nap, so he spent some time running around reception while my husband checked us in. When we got to our room he assembled the travel cot and we put James down for his nap. James then spent 50 minutes crying, moaning, talking to himself, counting and whinging before falling asleep for 20 minutes!  He obviously didn’t wake up in the best of moods, so we weren’t off to the greatest start.

After James had adjusted to being in a hotel we made our way down to one of the hotel’s restaurants.  James was in no mood for sitting down at a table.  He wanted to run around, so my husband and I took it in turns to run after him, while trying not to annoy other guests at the hotel, and the other one of us got the chance to talk to our friends. Their daughter sat nicely at the table playing with her toys.  I soon realised we have a child that is exhausting! We decided that we should all take a trip to the hotel spa so James could burn off some energy in the swimming pool. This was a great plan and I was excited for my husband to see how James had progressed in the water, no longer needing to be held and was able to move around himself in just his swimming vest.

The hotel spa was lovely, and Evelina and I managed to sneak off to the Jacuzzi and steam rooms, which allowed us to catch up without having toddlers to contend with.  We were able to talk just like we used to when walking around Vilnius.  It was also interesting to hear what it is like being a mum in Vilnius, and I was able to tell her about being a mum in the UK. Even though there are differences with what is on offer and how things are done for children in our countries, there are the same pressures and worries that every mum has wherever you live.

That evening we opted to eat in Marco Pierre White’s restaurant in the hotel.  We checked the menu online and it said they did some chicken goujons on their children’s menu, so I was confident James would be catered for.  As we walked into the restaurant I felt quite uneasy to be there with James.  It was quiet, there were no other children and the people who were there looked like they were enjoying the peaceful ambience of the restaurant.  It basically felt too posh to be there with a fussy toddler. James soon changed the atmosphere as he decided he was going to cry and not be content with anything we gave him to play with.  Then to top it all off there weren’t any chicken goujons on the menu.  The closest thing that we may have a chance of getting him to eat was fish and chips.  To be honest, even looking at the menu was a struggle while battling with my child crying and climbing all over me.  I ended up taking him to the Christmas tree and walking around looking at things in the restaurant hoping he would calm down.  I sat him on my lap rather than in the high chair and put something on YouTube for him to watch.  My husband’s starter arrived and included some toast, of which James actually took too, probably to my husband’s annoyance as he’s not one for sharing food.  I was happy that James had at least eaten something and had calmed down.  He didn’t eat his fish but he did eat some of his chips, another food that he doesn’t always take to.  I was wondering what our friends were thinking of us.  We had an extremely fussy eater, that wouldn’t sit still without watching my phone, while their daughter ate her dinner, sat and played nicely.

The next day we took a trip to Chester Zoo.  I knew it was going to be a cold day, but hadn’t quite realised how cold.  Now one thing about Lithuanians is that they always dress up really warm, so the cold wasn’t really a problem for our friends daughter, but it seemed I failed to dress James up warm enough. He needed more than a coat and gloves. He got cold and he certainly let us know about.  Then as soon as we went into an indoor area he was his happy self again.  He even got to eat chicken nuggets for lunch which he polished off.  It was coming up to nap time, and James was going to have a pushchair nap.  I was worried he would get too cold walking around outside. I  had some leggings in my bag so popped them on him under his trousers,  wrapped him up in his coat, with his hood on and gloves.  I put him in the pushchair ready to brace myself with having to walk him around hoping he would fall asleep.  I was amazed he didn’t kick off going in the pushchair and he did look really snug.  I decided to just leave him in it next to our table and to our amazement within about 5 minutes he had actually fallen asleep without us having to walk him around.  This was an achievement!

Despite the cold Chester Zoo was a fantastic day out.  It is huge (think theme park size).  We spent the day there and still didn’t get to see it all, so we will hopefully visit again sometime in the future. There are lots of inside parts to allow you to warm up and there are quite a few playgrounds for children, as well as plenty of eating options.  I think we all really enjoyed our day out there.  We then went and finished it off in the hotel spa. 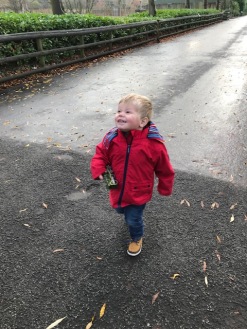 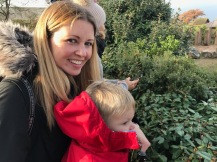 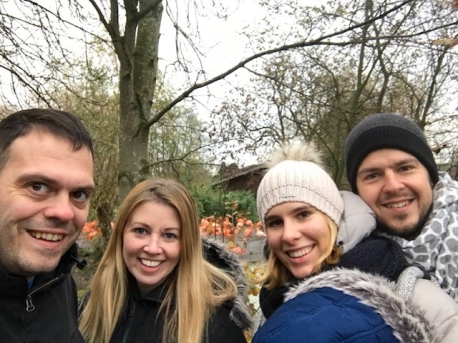 That evening we decided to eat in the other restaurant in the hotel.  The hotel wasn’t in the city centre so it was easier to eat there than to get two toddlers into the city and then back for bed. It looked like the option for James was battered fish, mashed potato and baked beans.  He started this meal a bit better and was occupied with colouring and toys.  However, it took quite a while for our food to arrive and James was getting overtired and irritable.  He did actually put some fish in his mouth, which we were proud of him for, but I don’t think he was sure about it as it took him a long time to swallow it and then he didn’t want any more, not even the mashed potato or beans, both of which he eats nearly every day at home. He was hungry and started kicking off, so I walked around the restaurant looking at the different lights with him.  This seemed to calm him down but he wasn’t interested in eating any more.  My husband ended up going up to our room to get James some Shreddies and a yogurt pouch. He ate these but I could just see he was really tired and at nearly 9PM it was way past his bedtime, so I took him up to bed.  He fell asleep quickly that night. 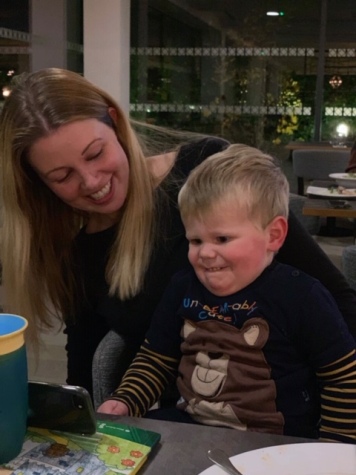 Before making the journey home we went into Chester city centre where James enjoyed running around the cathedral.  I want to add that I had dressed him appropriately this time with leggings, trousers, two pairs of socks, a hat, scarf and coat. Luckily everyone at the cathedral was friendly and seemed quite happy for James to run riot, despite him interrupting several guided tours by charging at them.  He’s cute, he can get away with this sort of behaviour. We also headed to a park where Evelina and I realised we had a fear of some very over friendly squirrels, James on the other hand couldn’t get enough of them, along with chasing all of the birds. 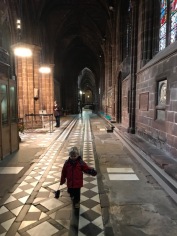 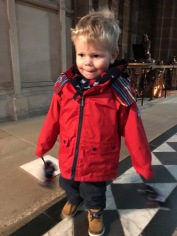 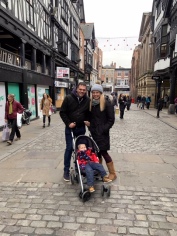 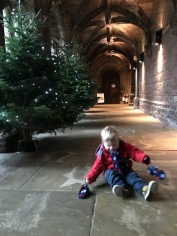 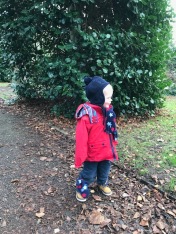 At times this trip was difficult, without James having the food he likes and his normal bedtime routine.  We were probably the table that no one wanted to sit near in the restaurants because we had a noisy child that didn’t want to sit still.  The staff at the hotel were fabulous and very accommodating to everyone’s needs as much as they could, but for me I found mealtimes with James stressful.  However, other than mealtimes I really enjoyed our stay in Chester.  It was lovely to see Evelina and her family again and we were able to talk just like we did when our toddlers were babies.  We used to have pretty much the same problems with our babies, but now as they have grown and developed their own personalities we face different challenges with our children.  It just emphasised that all children are different, develop in different ways and have their own quirks wherever they grow up in the world.