James and his cats

Before I had James, I saw my cats as my babies. They got a lot of attention and I posted a lot of pictures of them.  They are sisters and we got them as kittens when we lived in Norway.  In fact looking back at when they were kittens, they weren’t too dissimilar to having a baby.  Initially Blossom would only drink milk and we had to slowly introduce her to solid food.  They have frequently kept us awake at night, we clean up their poo and sick, and we are often worried about them when they stay out too long! Maybe you could say they prepared us for parenthood.

Before I even knew I was pregnant they started sniffing me in a weird way and became  more affectionate.  I am convinced they could smell the pregnancy hormones or something.  Blossom used to love coming to sit on my lap and cuddling up towards my bump.  Willow on the other hand was less interested, but seemed to think the pram was for her. 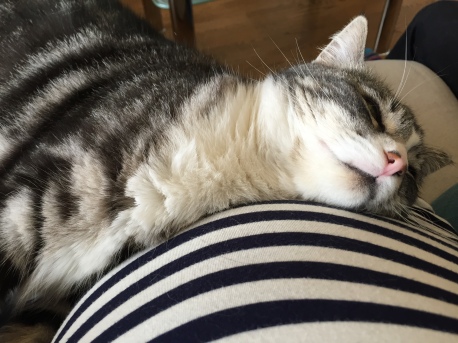 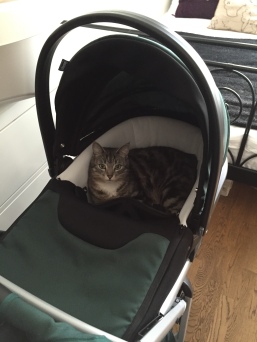 We were happy to be bringing James into the world with two pet cats.  I had cats myself as a child and I wanted James to experience the same joy that my cats brought me when I was growing up.  During my pregnancy we would often discuss (or worry) about what the cats would be like with a baby.  Before I came home from hospital my husband took a baby-grow home that James had worn, so that the cats could sniff it and get used to a new smell.  We have no idea if this made any difference, but it’s something I had read and thought it could be a good idea to try.

I was quite nervous about the cats meeting James.  Although our cats are very friendly and not vicious in any way, you never know how they will react to a new baby, a new member of our household that was here to stay.  I remember coming home and putting James down on a pillow on the sofa.  Willow was interested in him and climbed up on the sofa and peered down at him.  She just wanted to have a look at him.  In fact, Willow is very motherly towards James.  Ever since he was a baby she has come up to him and rubbed herself against him when he cries, like she is trying to comfort him herself.  Often when she comes in from being outside she goes to see him in his playroom and walks around him, wanting attention.  He finds this hilarious and she seems more than happy for him to pull her tail or touch her maybe a bit too hard.

It was hard work having cats and a baby.  They didn’t actually make having a baby any easier.  They still needed looking after but my attention was primarily on James.  At times I felt sorry for them.  They had always had our full attention and would come and sit on our laps in the evenings, but now we were busy focusing on James.  Frequently they wanted to be let outside when I was stuck on the sofa breastfeeding James.  They used to come in our room and think it was time to run around like crazy cats just as I had got James to sleep.  They wanted attention too, and they always knew the wrong time to ask for it.

James always seemed interested in the cats, but his interest in them has grown as he has got older and he absolutely adores them now.  They can be happy sleeping, and then he spots them, gets all excited and then goes and pokes them, which he thinks is funny.  They often put up with this and seem to like the attention he gives them, but then at other times they retreat to their safe places – under the sofa or in the utility room in the ironing basket, away from James’ reach.  We don’t allow the cats upstairs, but since James has discovered how to open doors he is frequently opening the door for them. We often think they are working as a team.  I was disappointed that he could say dog before cat, and now he can say Blossom (or Ossom, which he thinks is the name for both cats) before he can say mummy. 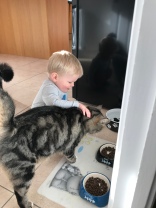 Our cats have adapted brilliantly to having James around. They are great with him, far better than we thought they would be, and it’s lovely watching James enjoy the cats.  He seems to like all animals and doesn’t show any fear towards them, which sometimes can be worrying as he charges towards dogs in the park.  I do think that like us, the cats are often looking forward to his bedtime so they can get some peace and curl up with us on the sofa in front of the TV, like old times.