I always think that going to a restaurant with a child is the ultimate place for people to judge you.  They can judge what you allow your child to eat, their behaviour at the table, how you keep them entertained and generally anything else that they can see. It is putting your children on display for people to criticise behind your backs. For children though, going to a restaurant probably isn’t the most exciting thing to do unless they have a real passion for food. For our fussy eater it can cause all sorts of problems. When James is hungry he gets angry and he doesn’t understand the concept of having to wait for food. As my husband suggests ordering a starter I am often thinking that just means James will have to wait longer for his food, unless the kids menu comes with a starter too or he can eat some of ours, although my husband isn’t fond of sharing food. He has made the mistake of giving James some of his starter before and then found that it ends up becoming James’ because it keeps him quiet.

My husband and I like eating out and generally we have managed to still do that with James, even though we have experienced times when we would like the ground to swallow us up. When James was a baby in Lithuania, we used to drive to a restaurant and hope that he would fall asleep on the way.  We would then take him inside in his car seat and hope that he would stay asleep while we ate.  He frequently woke up just as our food would arrive and I would end up breastfeeding him while trying to eat my food, which my husband would have to cut up for me into bite sized pieces, as trying to use cutlery while holding a baby isn’t the easiest of things to do. Other times we would walk to restaurants with James in the pram, so he could fall asleep on the way. This was often more successful than the car and he usually stayed asleep for far longer, and at times I even used to worry he had been asleep for too long.

As James got older, eating out became a lot more about how we would keep him entertained in restaurants so he wouldn’t kick off, and we are starting to get more successful at this. There have been occasions where I would dread eating out with James, because I knew it wouldn’t be enjoyable.  There have been times where he wouldn’t sit in a highchair and would only be happy on my lap, which made it quite hard for me to eat.  That was during the times where he was incredibly clingy and couldn’t bear to be away from me. The suggestion of going to a restaurant would fill me with dread because it wasn’t an enjoyable experience. Entertaining a toddler while trying to eat meant it was very difficult to relax and enjoy my food.

We have always struggled with what will James actually eat in a restaurant. We always check the menu before we go, and we have been faced with situations where the menu has changed and we have ended up ordering him something we know he won’t eat.  Luckily children’s menus often have some sort of breaded chicken or fish that he will usually have a go at.  More recently he has developed a love of bread and will happily eat the crust from a pizza.  Not exactly nutritious but it does make things easier in pizza restaurants and it also keeps him happy.  We are working on him trying to eat an actual pizza and hopefully he will do one day.  There was the famous incident of when I gave him some tomato sauce on the crust of a pizza where he completely kicked off, my husband refers to this as ‘tomatogate’. None of our usual tactics worked for calming him down so we resorted to taking it in turns to take James out of the restaurant and walking around with him while the other one ate in peace, and we didn’t completely annoy everyone else. It turned out all he really wanted to do was run around outside and not be confined to a high chair.

Moments before he kicked off

So how do we keep James entertained in restaurants… 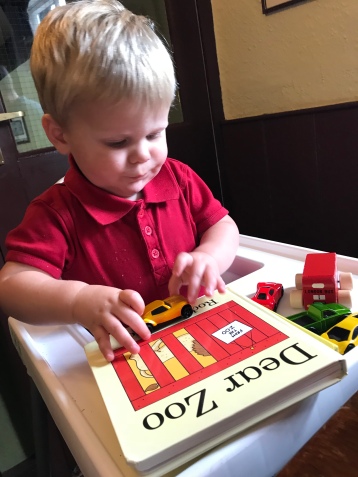 James has definitely improved with eating out in restaurants and I think it has helped that he is also less tired around lunch times now and doesn’t always have a nap which means he is happier and easier to manage. When he was desperate for a lunchtime nap we used to find ourselves eating quickly so we could then get him to nap.

How do you keep your children entertained in restaurants? 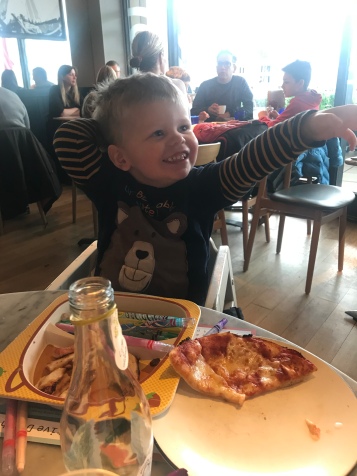