Dealing with a stubborn toddler

James is a child with a strong personality. He definitely wears his heart on his sleeve and isn’t afraid to show his emotions. At times this makes him exhausting, especially if he doesn’t want to do something.  He is very strong willed and it is hard to reason with him.

I often see children of James’ age and even younger walking around nicely with their parents in supermarkets or shops.  I on the other hand have no option but to put James in a pushchair unless I want a battle on my hands.  Most of the time he will protest about being in the pushchair too.  At the Post Office they even remember us because they know James doesn’t like shops and will scream in there.

When I take James somewhere he will look around and see things that he wants to play with, be it climbing on logs, splashing in puddles or on play equipment.  If I don’t let him do what he wants he will scream, give way on his legs and kick off until he gets his own way, or until I pick him up and physically move him to where I want to go. For example at the park this week, James wanted to play a game which involved running between two swings with children in them, obviously highly dangerous. In his head it is a really fun game to try and dodge them, in my head all I can see is him being kicked in the face.  I repeatedly told James it was dangerous, but everytime I stopped him it led to a tantrum, so much so I said we needed to leave the play area.

I have even found myself meeting up with friends less because I worry James won’t approve of where we are going.  If it is just James and I it is a lot easier because I can generally let him play where he wants to, providing its not dangerous.  When we are with friends I am so aware about how my child may behave that it puts me off seeing them.  I find myself going to “safe” places over and over where I know James will be happy and there is less chance of him getting upset.

Then there is potty training.  I get fed up of being asked when I am going to potty train him, I imagine people think I should have done it already.  I had planned to do it over the summer but I have come to the conclusion that James isn’t ready.  He is very obstinate and the more I ask him to do something, the less likely he is to do it. I think I will slowly introduce the potty to him more and more and pick my moments to teach him about it.

In the last few weeks James has just started using a spoon and drinking from an open cup himself, and this was down to letting him explore them more slowly and in his own time.  In fact he started doing both these on the same day and we were so proud. For months he has refused to use a spoon and would put my hand on it to do it for him.  If I put the spoon in his mouth and let go he would then leave the spoon there and make no attempt to pull it out.  The same with drinking out of a cup, he has always liked an open cup, but would want me to put it to his mouth.  Then one day he just decided that he could do it for himself and he is now drinking out of different cups and a water bottle.

I think they all develop at different rates. I will continue to show James songs about using the potty, read books about using the potty with him and ask him if he wants to use it and I know that one day soon he will say yes.  To get him to use a spoon and drink from a cup himself, I encouraged him, but didn’t force him, and eventually this approach paid off.

James is strong minded and will do things in his own time.  When he is not having a melt down or driving me mad by groaning constantly, he is great fun to be around and has an infectious laugh.  He may not be the most flexible child, and is very short sighted about what he wants to do, but when he is doing something he enjoys you can really see it and he’s a joy to be around.  He has a wonderful imagination and is great at coming up with his own games to keep himself amused. As much as he can be frustrating, we wouldn’t change his personality for the world. 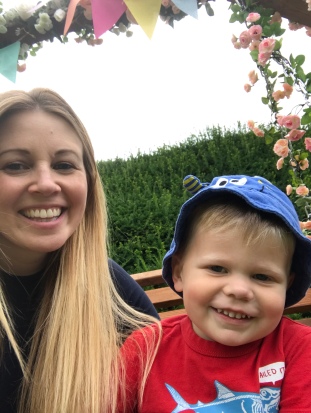