A weekend in the Lake District

We are lucky that James rarely kicks off in the car so the long journey wasn’t a problem. He enjoys looking out of the window at all of the cars and lorries on the motorway, and he has a small box of toys and books which are great for keeping him entertained.

We stayed at Lancaster House Hotel (not an ad) which we had previously stayed in when James was just 9 months old.  We find this hotel perfect because their suite rooms have doors that separate the lounge and bedroom area.  They have a children’s menu for the bar and restaurant and are very family friendly.  They also have a swimming pool for guests to use free of charge, although we haven’t used it on either of our visits.  Lancaster is about 30 minutes away from Grandads house, and Lancaster House Hotel isn’t far from the motorway so it works well for us.

The first time we visited the Lake District I thought it would be a good idea to leave Cheltenham after lunch so James could nap.  It was disastrous because it took us over 5 hours to get there, as we hit a lot of traffic with people finishing work early on a Friday.  This time we left at 10:30 AM and arrived at around 2 PM, which included a stop for lunch.  This meant that we had the afternoon for the three of us to do something before we met Grandad on the Saturday.

My husband suggested we went to Morecambe for the afternoon.  It wasn’t too far and it meant James could run along the beach. He definitely needed some running around time after being in the car for so long. I dressed him in waterproof trousers and wellies as I was sure he would be jumping in puddles and walking in the sea.  James loved the beach, his highlight was finding a stick, throwing it in the sea and watching it being washed up on the beach again.  This was great fun for him until the sea stopped washing it up on the beach and it had gone too deep for me to go in and get it in my wellies.

The problem we have is that James is great when he is doing something he enjoys, but then when it comes to moving him on and showing him something else he will enjoy, all hell breaks loose and he deploys the kicking and screaming act that makes people think we are trying to kidnap him.  This happened numerous times on our trip to Morecambe.  Our child has more mood swings than a teenage girl.  Completely happy one minute and then acts like the world is ending the next.  This was exhausting.

However, we did had a lovely walk along the jetty.  James enjoyed running up and down and watching the boats in the sea but when it came to going back to the car we had to drag him kicking and screaming. 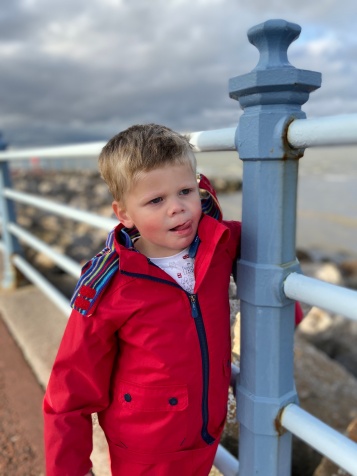 The offer we had with our hotel booking meant that we got a meal included in the restaurant on the first night. We checked their children’s menu before booking and thought there was a possibility that James may eat something.  We ordered some bread to start because we knew James would eat this.  He then had fish, chips and peas.  He ate two bits of fish, a few chips and obviously didn’t touch the peas.  I think he was put off because this fish was a lot higher quality than the frozen fish he eats at home. We ordered him ice cream for pudding but in true James style he rejected it because it had sprinkles on it.

Our hotel room had a huge bathroom with a lovely free standing bath which James seemed quite taken with.  He liked running into the bathroom and sliding on the floor saying “slippery” and finding it funny.  He actually seemed to enjoy his bath, and it was a marked improvement from previous baths in hotel rooms where he has spent the whole time screaming. To keep bathtime familiar to him we took some foam letters and cups that he plays with in the bath at home and this seemed to keep him happy.

This trip was the first one where James would be sleeping in a bed rather than a travel cot and this was my main worry about our trip.  I had visions of having to lie next to him until he fell asleep or him constantly getting out of bed and running around. He cried through his first bedtime story and then whimpered through the other two we read him.  I then gave him a cuddle and lay him down on the bed.  He stayed on the bed but cried.  I hated hearing his distraught cries but we knew that he would fall asleep soon.  I think I went in once to check on him during his 30 minutes of crying before he fell asleep.  We were really impressed with him; he was very tired and he stayed in the bed.  He even woke in the night and self settled.  When he woke in the morning he stayed in bed until after I had a shower and went in to get him.

For breakfast James was more than happy eating two Weetabix, and he seemed very impressed with the hotels apple juice, obviously far better than we have at home.  It was then time to go and see Grandad.  Grandad took us to Windermere for lunch and for a walk around.  The lunch at The Angel Inn (not an ad) went fine and James loved his chicken goujons and behaved nicely.  The walk around was problematic with James wanting to run along jetties and generally do everything we didn’t want him to do.  He wanted to do less walking and more trying to get as much of Lake Windermere into his wellies as possible.  Typically on this occasion I hadn’t put his waterproof trousers on, so James’ trousers, wellies and socks all got drenched.  Luckily I had some clean socks and leggings in my bag and we were able to change him when we got back to the car. The wellies however were so wet inside they were a write-off for the rest of the trip.

We then drove to Haverthwaite to get the steam train to Lakeside.  James seemed very impressed by this, especially as there is also a play area at the station.  We boarded the train and James decided he was going to sit on my lap the whole journey rather than sit on the seat himself.  He was in awe the whole journey and loved it.  He was less impressed with the aquarium at Lakeside and only seemed to be happy when he found a ships steering wheel he could play with.  I was quite embarrassed by the numerous tantrums we were having and it was getting exhausting.  Luckily he also enjoyed the train journey back to Haverthwaite.

That evening we ate in the hotel bar.  We ordered James some cheesy garlic bread of which he ate about two pieces and then rejected the rest.  Luckily I had a bag of breadsticks in my bag which he did seem to be satisfied with. 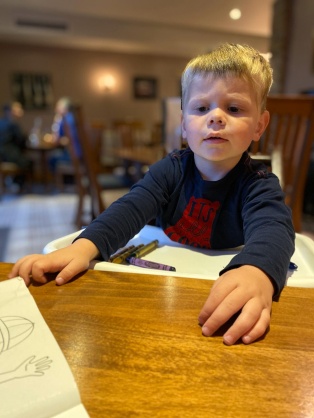 Bedtime went very smoothly and he was asleep within 5 minutes of us putting him to bed.  He woke up a couple of times in the night but self settled and again waited for us to go in before getting up in the morning.

On Sunday we met Grandad at Williamson Park in Lancaster.  This park has stunning views, a play area, mini zoo and butterfly house.  James had no interest in anything other than the play area, so that is where he spent most of his time.  Grandad watched James while my husband and I went to the mini zoo and butterfly house as we knew James would have no interest in this.  He loved the play area, especially when Grandad was pushing him on the swing.

We then headed back to the car to set off on our journey home, via a stop in Blackpool for fish and chips. James was again great in the car and absolutely shattered when we got home.  If only he would stay in his bed at home like he did in the hotel room.

At times I found this trip exhausting.  Tantrum after tantrum was difficult to deal with, especially when he is getting so heavy when we need to physically move him or pull him along.  James has a strong personality and he certainly lets us know when he is not happy about something.  He basically wants to play in water, run around where he wants to go, play in a park or be on a train.

On a positive note he is great in restaurants and will usually be kept entertained by colouring and eating.  We still need to use a highchair because he won’t sit still or stay on a chair, which could become problematic as he is getting too big for highchairs in restaurants.  He was also brilliant at sleeping in a bed in a hotel room, which has been a concern of mine about going away for a long time.  So overall we had the usual toddler tantrums to deal with but we also learnt that James can be very adaptable which I often don’t give him credit for.